Electric pump
In many modern cars the fuel pump is usually electric and located inside of the fuel tank. The pump creates positive pressure in the fuel lines, pushing the gasoline to the engine. The higher gasoline pressure raises the boiling point. Placing the pump in the tank puts the component least likely to handle gasoline vapor well (the pump itself) farthest from the engine, submersed in cool liquid. Another benefit to placing the pump inside the tank is that it is less likely to start a fire. Though electrical components (such as a fuel pump) can spark and ignite fuel vapors, liquid fuel will not explode (see explosive limit) and therefore submerging the pump in the tank is one of the safest places to put it. In most cars, the fuel pump delivers a constant flow of gasoline to the engine; fuel not used is returned to the tank. This further reduces the chance of the fuel boiling, since it is never kept close to the hot engine for too long.

The ignition switch does not carry the power to the fuel pump; instead, it activates a relay which will handle the higher current load. It is common for the fuel pump relay to become oxidized and cease functioning; this is much more common than the actual fuel pump failing. Modern engines utilize solid-state control which allows the fuel pressure to be controlled via pulse-width modulation of the pump voltage.[1] This increases the life of the pump, allows a smaller and lighter device to be used, and reduces electrical load.

Some cars with an electronic control unit have safety logic that will shut the electric fuel pump off even if the ignition is "on" if there is no oil pressure, either due to engine bearing damage or a non stalled engine, e.g. in a car accident. In case of an accident this will also prevent fuel leaking from any ruptured fuel line. Other cars have an additional roll over valve, that will shut off the fuel pump in case the car rolls over. Some Ford cars also have a fuel cut-off switch that will simply shut power down to the electric fuel pump relay in the case of a collision.

The fuel sending unit assembly may be a combination of the electric fuel pump, filter, and the electronic device used to measure the amount of fuel in the tank via a float attached to a sensor with sends data to the dash mounted fuel gauge.
Turbopumps
Many jet engines, including rocket engines use a turbopump which is a centrifugal pump usually propelled by a gas turbine or in some cases a ram-air device (particularly in ramjet engines which lack a shaft). 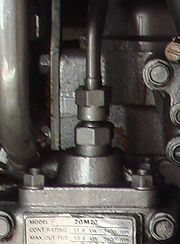 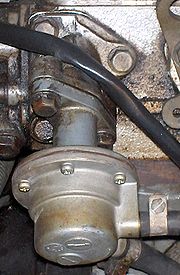 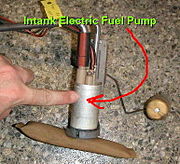