An Injection Pump is the device that pumps fuel into the cylinders of a diesel engine or less typically, a gasoline engine. Traditionally, the pump is driven indirectly from the crankshaft by gears, chains or a toothed belt (often the timing belt) that also drives the camshaft on overhead-cam engines ( OHC ). It rotates at half crankshaft speed in a conventional four-stroke engine. Its timing is such that the fuel is injected only very slightly before top dead-centre of that cylinder's compression stroke. It is also common for the pump belt on gasoline engines to be driven directly from the camshaft.

Because of the need for positive injection into a very high-pressure environment, the pump develops great pressure_typically 15,000 psi (100 MPa) or more on newer systems. This is a good reason to take great care when working on diesel systems; escaping fuel at this sort of pressure can easily penetrate skin and clothes, and be injected into body tissues with serious consequences.

Earlier diesel pumps used an in-line layout with a series of cam-operated injection cylinders in a line, rather like a miniature inline engine. The pistons have a constant stroke volume, and injection volume (ie, throttling) is controlled by rotating the cylinders against a cut-off port that aligns with a helical slot in the cylinder. When all the cylinders are rotated at once, they simultaneously vary their injection volume to produce more or less power from the engine. Inline pumps still find favour on large multi-cylinder engines such as those on trucks, construction plant, static engines and agricultural vehicles.

For use on cars and light trucks, the rotary pump or distributor pump was developed. It uses a single injection cylinder driven from an axial cam plate, which injects into the individual fuel lines via a rotary distribution valve. Later incarnations such as the Bosch VE pump vary the injection timing with crank speed to allow greater power at high crank speeds, and smoother, more economical running at slower revs. Some VE variants have a pressure-based system that allows the injection volume to increase over normal to allow a turbocharger or supercharger equipped engine to develop more power under boost conditions.


All injection pumps incorporate a governor to cut fuel supply if the crank speed endangers the engine - the heavy moving parts of diesel engines do not tolerate overspeeding well, and catastrophic damage can occur if they are over-revved.

Mechanical pumps are gradually being phased out in order to comply with international emissions directives, and to increase performance and economy. Alternatives include common rail diesel systems and electronic unit direct injection systems. These allow for higher pressures to be developed, and for much finer control of injection volumes compared to mechanical systems. 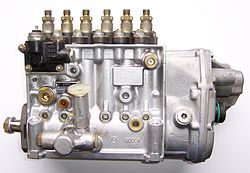 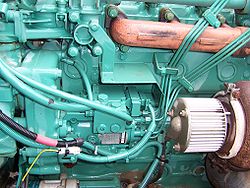